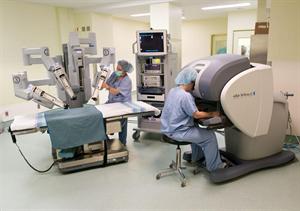 The phrase “cutting edge” has taken on a whole new meaning for surgeons and patients at our Department of Urology, where a state-of-the-art da Vinci surgical robot is being used to perform delicate, minimally evasive procedures.

The $4.5-million robot, one of only a handful of advanced models in Canada, frees the surgeon from having to directly handle surgical instruments. Instead, da Vinci’s four robotic arms — each bearing its own instrument — are passed into the patient’s body through small incisions. The surgeon, sitting several metres away at a special console equipped with a 3D monitor, uses hand controls and foot pedals to manipulate the robotic arms with a degree of precision that can be difficult to achieve in regular, hands-on laparoscopic surgery.

As a result, “robot-assisted surgery is less invasive and more easily tolerated, meaning that patients tend to recover remarkably quickly and suffer fewer side effects,” explains Dr. Jacques Corcos, Chief of Urology at the Jewish General and Director of the hospital’s Robotics Program. “For instance, prostatectomies performed with robotic technology result in a significantly lower incidence of sexual dysfunction and incontinence — common side effects of prostate surgery.”

Dr. Corcos says the JGH Robotics Program, working in collaboration with other national and international robotic centres, will facilitate surgical advances not only in the field of urology, but also with regard to gynaecological cancers and other specialties such as cardiac and neuro-surgery.