The Centennial of the Goldman Herzl Family Practice Centre 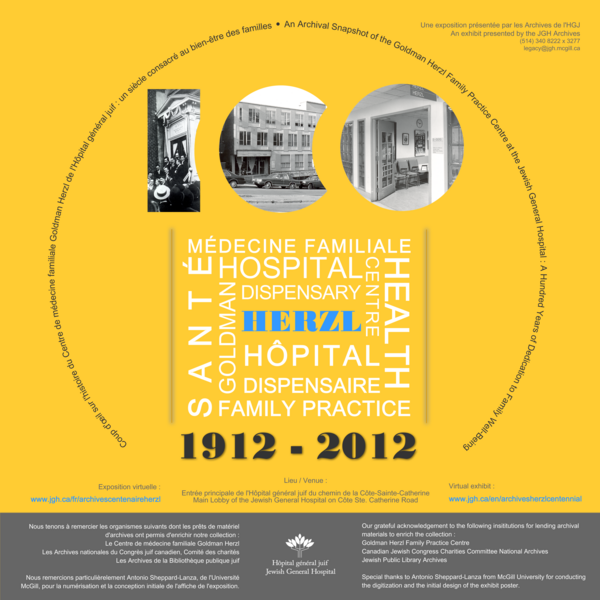 In 2012 the Goldman Herzl Family Practice Centre at the Jewish General Hospital will be celebrating its 100 year anniversary. The current exhibit features archival documents, photographs, and objects that represent the medical and cultural history of the Centre.

Established in 1912, the Centre was originally named The Herzl Hospital and Dispensary in honor of Theodore Herzl, the founding figure of modern political Zionism. As the first Jewish clinic in Canada, it offered Montreal’s Jewish poor much needed medicine and health care at little or no charge. The Dispensary was a precursor of the Jewish General Hospital and along with the Hebrew Maternity Hospital, helped pave the way for its founding.

In the 1940s, the Dispensary developed into the Herzl Health Centre which shifted focus from curing disease to preventative medicine in response to the changing needs of the community. In 1974 it merged with the Jewish General Hospital and became the Herzl Family Practice Centre of the Department of Family Medicine, offering a full range of family health services to a diverse community.

Throughout its 100 years the Centre has undergone many changes in location and mandate while continuing to evolve to meet public demand for its services, but it has remained an important and beloved community institution. The Jewish General Hospital Archives invites you to visit this historical exhibit and join us in a year-long centennial celebration!

Special thanks to Antonio Sheppard-Lanza from McGill University for conducting the digitization and the initial design of the exhibit poster.