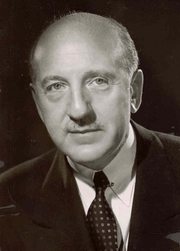 "The presidency of philanthropist Allan Bronfman defined the Jewish General Hospital, not just because it spanned the first 22 years of the hospital’s existence, but because it was preceded by Mr. Bronfman’s extraordinary efforts to ensure that the hospital would be built.

Born in 1895 in Brandon, Manitoba, Mr. Bronfman studied law at the University of Manitoba before moving to Montreal in 1924 to join his brothers in the distillery and wine business. Once in Montreal, he was quickly recognized as a community leader, rising to prominence through his involvement with the Hebrew Maternity Hospital (one of the forerunners of the JGH) and the Federation of Jewish Philanthropies.

Mr. Bronfman demonstrated strong leadership on many of the committees that led to the hospital’s creation, including the 1927 committee that produced a study determining the need for and feasibility of a Jewish hospital. In 1929, he served as Chair of the Executive of the Campaign Committee, which collected funds and later supervised construction of the hospital.

From the hospital’s earliest inception, Mr. Bronfman had the firm conviction—which ultimately became reality—that the JGH must commit itself to serving all patients, regardless of their religious, ethnic or cultural background. After the hospital opened in 1934, he dedicated himself to achieving excellence in what have come to be known as the three pillars of the JGH: patient care, teaching and research.

Very early on, Mr. Bronfman also realized that in order to properly fulfill its destiny, the hospital had to achieve university affiliation. His overtures to McGill University were rewarded in the late 1960s when partial affiliation was achieved, followed in the mid‑’70s by a full link to McGill.

Mr. Bronfman’s son, Peter Bronfman, continued his father’s legacy by serving as President of the Jewish General Hospital from 1976 to 1978.