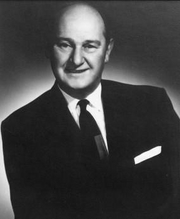 Although Philip Garfinkle’s talents were eagerly sought by and generously given to many causes in the Jewish community, he had a special relationship with the JGH. He actively participated in the memorable campaign of 1929 to raise funds t build the hospital and he occupied a leadership position in every subsequent campaign.

As a member of the Board of Administration for many years, Mr. Garfinkle chaired many committees, including the Building Committee. As President, he oversaw the JGH’s growth and scientific development during an era of dramatic expansion.