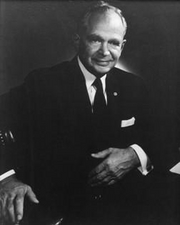 In addition to his leadership role at the Jewish General Hospital, Samuel Steinberg is best known for having transformed Steinberg’s, the grocery store founded by his mother, into one of Quebec’s largest supermarket chains. At the age of 4, his family immigrated to Canada from Hungary and settled in Montreal where his mother opened her store.

A visionary, Mr. Steinberg transformed food retailing through mass merchandising, mechanization and a bilingualism policy for all company employees. By the end of the 1950s, his stores were a dominant force throughout Quebec and in 1959 he expanded into Ontario.

A benefactor to his community, Mr. Steinberg and his wife funded many philanthropic causes including the Judaism Pavilion at Expo 67, the Helen and Sam Steinberg Foundation’s Geriatric Day Hospital, and the Sam Steinberg Award for Young Jewish Entrepreneur of the Year, awarded by the Jewish Chamber of Commerce of Montreal.