During the COVID-19 pandemic, important updates or information about changes that affect CIUSSS West-Central Montreal's sites, programs or services will be posted on our website. 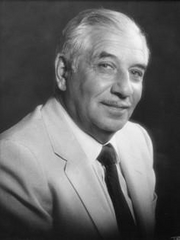 Born and educated in Winnipeg, Humphrey Kassie moved to Montreal in the mid‑1930s and served in the Canadian Air Force during World War II. For many years, he occupied a leadership role on the Jewish General Hospital’s House and Purchasing Committee, eventually becoming Vice‑President and President.

Mr. Kassie also served as Chairman of various divisions of the Combined Jewish Appeal; President of the Jewish Vocational Service (with a special interest in the sheltered workshop); a Governor of the YM-YWHA; and an active member of B’nai B’rith. In the business world, he was President of Halco Leasing, an auto leasing firm.