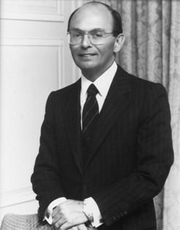 During his presidency, E. Leo Kolber was faced with many challenges due to turmoil in the health care system. In the face of hospital closures and downsizing, he was firm in his defence of the JGH and considered access to high‑quality healthcare services a non‑negotiable issue.

He also contributed greatly to strengthening ties with McGill University and ensuring that issues raised by the medical staff were addressed. In recognition of his contribution to the hospital, he received the JGH’s Distinguished Service Award in 2003.

A graduate of the McGill University Faculty of Law, Mr. Kolber was called to the Quebec Bar in 1952 and received a Doctor of Laws Honoris Causa from Concordia University in 1996.

Mr. Kolber founded the Cadillac Fairview Corporation, one of the world's leading real estate developers, responsible for such landmark buildings such as the Eaton Centre and Vancouver's Pacific Centre. Until 1993, he was also Chairman of Claridge Inc, a Montreal-based private management company.

For almost 30 years, he was President of CEMP Investments, the business arm of the trusts established by the late Sam Bronfman for his children and grandchildren. CEMP Investments concentrated on the development of real estate in Canada, the United States and Europe.

Active in many social, cultural and philanthropic organizations, he has held various leadership positions, including Combined Jewish Appeal, State of Israel Bonds and the Jewish Rehabilitation Hospital.