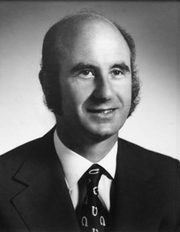 Peter Bronfman has the distinction of being the first and, to date, the only son to have followed in his father’s footsteps in becoming President of the Jewish General Hospital. (Allan Bronfman served as founding President from 1933 to 1955.)

Born in Montreal in 1929, Mr. Bronfman earned a B.A. from Yale University in 1952 and soon afterward became immersed in community involvement.

Before becoming President of the JGH, Mr. Bronfman was a member of the hospital’s Executive and its House and Purchasing Committee. He also distinguished himself on the JGH’s Joint Conference Committee, a crucial liaison among medical, administrative and lay members of the Board.