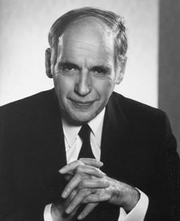 In addition to serving as President of the Jewish General Hospital, Herbert E. Siblin was a member of the hospital's board for almost two decades.

His involvement began in 1970 when, as a chartered accountant, he began to take a particular interest in the JGH’s financial activities.

When a serious budget crisis occurred in the ’70s, Mr. Siblin joined the newly formed Budget Control Committee to help steer the hospital into the clear.

As Vice‑President and Treasurer of Sir Mortimer Davis Inc., he worked with the hospital in the late ’70s to arrange a smooth merger of that organization’s funds with those of the JGH Foundation.

Mr. Siblin received his CA degree from the McGill University School of Commerce in 1953 and was awarded the Lieutenant‑Governor’s Medal for highest standing in his class. After distinguishing himself in his professional career, he was given the of Governor Emeritus and Honourary Treasurer from McGill University. In recognition for a lifetime of contribution to the community, Mr. Siblin was named to the Order of Canada in 2002.