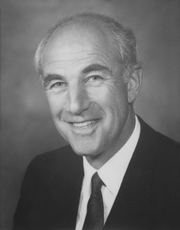 In recognition of his contribution to ensuring excellence in patient care, research and funding, Mr. Vineberg received the hospital’s Distinguished Service Award in 2002.

He has been active in the development of the Research Foundation for the Department of Oncology at McGill University and its related hospitals.

Mr. Vineberg is also a co-founder and co-president of the Tolerance Foundation, a non-profit and non-partisan organization whose mission is to prevent and make the public aware of the negative impact of intolerance, prejudice, racism, exclusion and discrimination in our society.