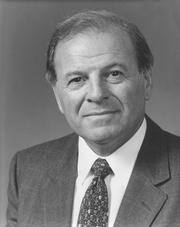 In addition to his term as President, Leo Goldfarb served as President of the JGH Foundation, Chairman of the Audit and Budget Control Committees, and a member of the President's Advisory Committee. His exemplary efforts on behalf of the hospital earned him the Distinguished Service Award in 1997.

During the 1960s and ’70s, Mr. Goldfarb rose to the highest corporate levels at Steinberg’s and Trizec Corp., and he later held positions as President and CEO of Place Bonaventure.