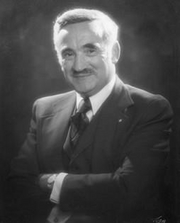 During his term as President of the Jewish General Hospital, Bernard J. Finestone emphasized communication and education among senior staff and members of the executive.

It was his initiative that led to the hospital’s milestone Mirabel Conference, where concerned individuals met to discuss issues of mutual concern. The resulting spirit of cooperation acted as a catalyst for development of new programs throughout the hospital.

Believing that only well informed members can function at a high level, Mr. Finestone also encouraged the education of board members, as well as introducing an extensive orientation program for staff.

His leadership in instituting sometimes painful budgetary cuts led to recognition of the JGH by the provincial government as one of the most efficient hospitals in Quebec.

Born in California in 1920 and educated at McGill University and Sir George Williams University, Mr. Finestone served overseas in the Canadian Army (9th Armoured Regiment) during World War II and returned with the rank of Captain. After the war, he joined his father’s chartered insurance brokerage and became its President in 1949.

Bernard J. Finestone in the News

Col. Bernard (B.J.) Finestone is a fixture at annual remembrances of Canada’s war fallen and a regular speaker to students about his experiences as a battle captain in Europe.

Finestone, who is 90 but looks about 20 years younger, was captain of a tank squadron. He was in England during the German Blitz and then fought in Italy for nearly a year. During a battle for Rome on May 31, 1944, he was wounded in 40 places by an eight-millimetre shell and was in a military hospital for more than three years.

Finestone’s entry into the military was not easy for him, either. In 1937, he was part of a McGill University peace movement which had just voted not to defend their country in case of war, but his father was urging him to join the Canadian Officer Training Corps.