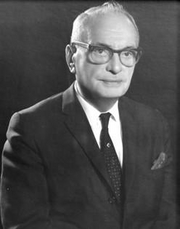 David Kirsch, one of the founders of the Jewish General Hospital, began his involvement in social work in a leadership capacity in 1910 when he joined the board of the Montreal Hebrew Orphans and Sheltering Home.

In 1927, he was instrumental in producing a study that led to creation of the JGH. He served as Chairman of the hospital’s Building Committee from 1939 to 1958, a period that overlapped in its final years with his term as President.