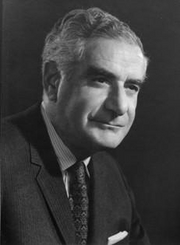 Arthur Pascal had a long and rewarding association with the Jewish General Hospital, where he held various positions including Vice‑President and Chairman of the Building Committee. In addition, he had a long record of service on behalf of Canada and many charitable organizations, as well the private sector.

Born and educated in Montreal, Mr. Pascal served in Europe for four years during World War II as a member of the 7th Reconnaissance Regiment, 3rd Canadian Division.