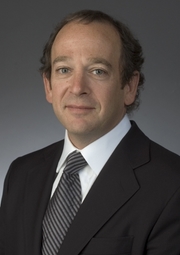 Among the many highlights of James Alexander’s term as President was the launch of the Segal Cancer Centre in 2006 and a dramatic increase in the variety and volume of patient services in newly expanded and renovated areas of the hospital, including Pavilion H.

In this way, Mr. Alexander has further strengthened his family’s strong philanthropic connection to the JGH, while honouring the memory of his grandfather, Sam Steinberg, who was President from 1966 to 1969.

Mr. Alexander joined the President’s Advisory Committee in 1995 and subsequently held positions on almost every major hospital committee, including Finance, Audit and Governance. He began serving on the Board of the JGH Foundation in 1997, becoming President from 1999 to 2003.

Earlier in his career, Mr. Alexander had spent 10 years at Steinberg’s Ltd. and managed an importing company before becoming a partner in a personal investment firm. He has also played a significant role in various charitable organizations.