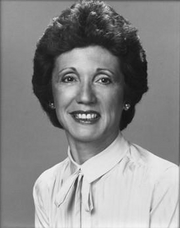 Sheila Zittrer has the distinction of being the first and, to date, the only woman to be elected President of the Jewish General Hospital.

She began her involvement with the JGH as a volunteer and later became President of a volunteer group within the Herzl Health Centre. It was during her term with this group that the Centre was formally integrated into the JGH, becoming the Herzl Family Practice Centre.

Once the JGH/Herzl amalgamation was completed, Mrs. Zittrer strengthened her ties to the hospital by being elected to the Board—ultimately becoming Vice‑President and then President.

She also represented the JGH at the Joint Hospital Institute and served as Public Affairs Chairman of the JGH Auxiliary. In addition, Mrs. Zittrer was active on many levels of the Allied Jewish Community Services of Montreal (now renamed Federation CJA).